This is a guide on how to build a Repeating Timer. Be aware that this construction makes the Parts flicker rapidly, so epileptics may want to cover the creation with blocks.

Flip-flops are the basis of this design. You would theoretically only need two Logic Gates feeding into each other to mimic this, but Scrap Mechanic doesn't allow two Parts to be the input-and-output of each other. Attempting to do so with the Connect Tool will just remove the existing connection. Instead, the Timer is put between the output of one gate and the input of the other gate to simulate both gates being circularly connected.

You need the following Parts:

These Parts are optional:

1. Connect the timer and logic gates to a structure. Leave one logic gate as AND, but set the other to NOR. 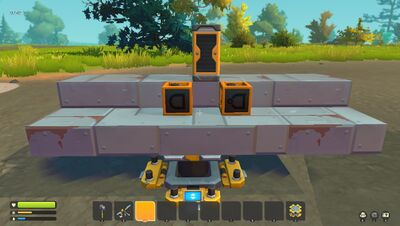 2. Use the Connect Tool to connect these three Parts in a triangle. The order and direction do not matter. The picture shows the following specific arrangement. 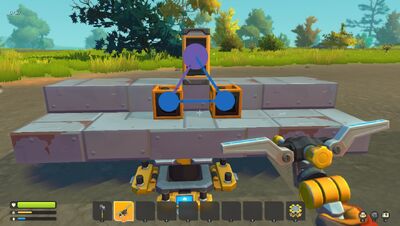 3. Optionally, add a Switch or Button to the Creation. It will allow you to stop the looping timer.

4. Finally, connect any one of the Logic Gates or the Timer to the Interactive Part you want to activate repeatedly. 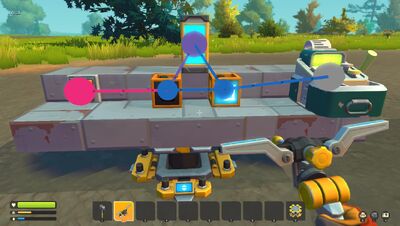 The output of any of the three Parts can automatically and rapidly activate things. This can be a basic component of a larger system.