Difference between revisions of "Farmbots"

Farmbots, also known as Agribots, are an upcoming enemy in Scrap Mechanic. They will be added with Survival Mode.

Farmbots have been mentioned in various Devblogs on the official website, as well as making an appearance in the debut trailer. Devblog 6 mentions that there will be various types of Farmbots, each with different abilities.

According to the backstory, the Farmbots are robots built to tend the farms on an agricultural planet, the setting of the game. At some point before the player character arrives, something goes wrong with the Farmbots, causing them to attack humans on sight (and take over the radio station, for some reason). 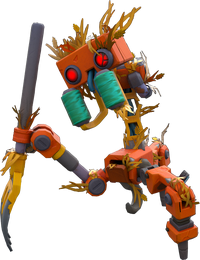 Built to be the 'zombies of Scrap Mechanic', Haybots are to be a fairly bog-standard enemy the player would encounter out on the fields. They were apparently supposed to collect, roll and package hay, but now want to collect, roll and kill the player. Looking fairly deranged, their eyes are confirmed to glow at night and they may hold pitchforks in their limbs to serve as weapons. They were introduced in Devblog 18. They have 2 atacks, the poke and swing. The poke is a quick attack and does 20 damage, (The player has 100 HP) and the swing does 30 damage. The haybots can easily overwhelm and kill you if you are not prepared with a spud gun.

Implemented with the Challenge mode update.

Will take notes when the player builds something. They work like a scoreboard keeper, tracking how much time took you to complete a task in the Challenge mode.[1]

'Scrapbots' are farmbots active in the Scrapyard biome. They are huge robots that collect and pile up the scrap found in the biome. They might be dangerous for the player.

Tapebots were originally announced in Devblog 16, appearing as the main antagonists and enemies the player would encounter in the Warehouses. They will apparently shoot rolls of tape at the player if they enter a warehouse, the damage seems to be powerfull and have a knockback effect. They used to roll and store tape in the warehouses. Now, however, they have gone haywire and taped the entire warehouse up. They are apparently among the more difficult Farmbot types, as the devs have mentioned that the Tapebots will be "very dangerous and the players will need to be tactical, creative and show quick reflexes in order to deal with them".

Farmbots of unclear true origin, Totebots are spider-like crawlers that are meant to be a fairly creepy Farmbot of unknown tier. They are already referenced in-game with the Totebot Heads, which create noises akin to music. Totebot files are already present in-game and are the farmbots that were meant to be part of the game from the first. Lately as of recent Twitter post, they have been classified as small playfull bots that follow the player, they also seem annoying and they deal a small amount of damage towards that player.