Glowb, or Glowbug, is an animal in Scrap Mechanic.

Glowbs are very small glowing yellow and green colored creatures. They spawn underwater on the ocean floor, though they can survive both underwater and on land.

Hold right mouse to pick up a Glowb. Left-click to release it.

Glowbs take damage if a player stands on them.

Glowbs can be fed 15 Cardboard Blocks to produce 1 Glow. It is recommended that you take the Glowb out of the water to feed it, which makes this process much easier.

Glowbs exert forces on creations. This makes them an effective, if unconventional, propulsion method for traversing water. In large enough numbers, almost any ship can be propelled to a speed comparable to the players swimming speed. 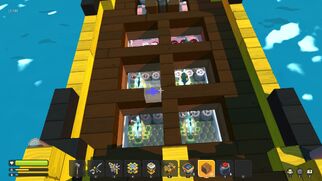 A 3x3x3 chamber of any material with a 2x3 opening in the front. In the middle of the 2x3 opening should be a valve or other block with an odd collision box. Cardboard should be placed more than 2 blocks away from the front face of the chamber, out of reach but not out of sight for the Glowbs.